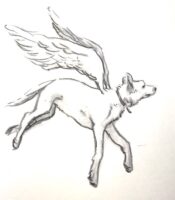 One day our dog, of all strange things,
spontaneously sprouted wings.

As charming as it seemed to us,
our spirited canine Pegasus
was soon cavorting in the air
creating chaos everywhere!

Once he began, he couldn’t stop!
From countertop to countertop
he sprang, and acted rather rude,
unleashed in this new altitude.

He leapt and capered without fear,
twice landed on our chandelier;
no books were safe atop our shelves;
he seemed quite happy with himself!

He chased some squirrels along phone wires,
his exploits took him ever higher!
He broke some crow’s eggs in a nest
and quickly gobbled up the mess.

At last transpired what we all feared–
our bird-dog simply disappeared;
faints echoes of his bow-wow-wows,
a wagging tail above the clouds.

Weeks passed before we chanced to see
reports of him on our TV,
tilting high above some beach
at seagulls formerly out of reach.

He became a kind of YouTube star
chasing roller coaster cars,
(a thing he dearly loved to do
when gravity had him subdued.)

We got an email from a man
who saw him buzz El Capitan!

His wings took him beyond our ken,
but wouldn’t bring him back again.
We faced at last the awful truth
Our dog had literally flown the coop.

We hoped he wouldn’t meet a fate
like drifting into outer space,
or be struck by some big airbus,
to fall to Earth like Icarus.

We scanned the skies and promised treats
To our half-hound, half-parakeet,
But silence was the lone reply
To all entreaties to the sky.

At last, a plaque placed on our lawn;
read, “Our high-flying dog is gone.”

Then, after several months of grief
we heard a sound that strained belief!
Shocked, we could have not been more
to find him scratching at our door.

Bedraggled and in need of sleep,
he lay down in a furry heap.
His wings long gone, lost in the chase…
but what a smile upon his face.