Who Will Defend The Mosquito? 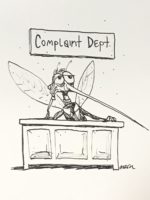 I was thinking last night about mosquitos.

I was thinking about what I recently heard an intelligent fellow on a podcast opine, that if in some future time when it becomes possible for humans to completely delete an entire species from planet Earth, the mosquito would be hard pressed to find an advocate.

Obviously, “The Butterfly Effect” applies, and there may be some way that the mosquito as a species contributes to the overall well-being of the planet, but it would take a legal mind on the order of the late Johnny Cochran to (ahem) drive that point home.

It’s interesting to note that, as I’m sure you have experienced, the peace and tranquility of an entire house can be utterly destroyed by the presence of a living thing whose weight is only about five milligrams.

That’s a worse discomfort-to-mass ratio than even the princess and the pea!

And, unlike a pea, the mosquito is mobile, shifting it’s position constantly, practically invisible to the human eye.

No pea variety that I know of has ever been accused of spreading malaria, either.

Mosquitos are a great symbol though, and maybe that is their greatest use to our race. They symbolize the annoyance of pesky critical thoughts that invade our mental real estate, wreaking havoc on our hopes and dreams.

Self-critical thoughts, like the wretched mosquito, can appear out of nowhere, from some unseen source, and ruin an evening indoors, or a pleasant day out in nature, just by buzzing around.

“I exist”, the mosquito trills, and the mere prospect of it’s landing and penetrating our flesh banishes sleep.

If a landing is accomplished, in seconds the mosquito can complete his dreaded work, which at best leaves an itchy bump and at worse… well, you remember the Panama Canal!

So, too, do nagging, critical thoughts plague one, in sunshine or in darkness, and need not “land” but merely circle to spoil one’s jolly mood.

If they “land”, like a mosquito they can set up shop, not on one’s scalp or elbow, but on one’s peace of mind, and exert their gloomy influence for years.

How then, to out-spoil the spoiler?

Well, we swat mosquitos, don’t we?

To do this, we locate, isolate, identify, then let swing with force and accuracy. If we miss, we wait, listen, regroup and repeat, until the miserable thing lies dead in the palm of our hand like a bloody, drunken asterisk.

Could not the same thing work on negative thoughts?

“I exist” says the unseen, invisible critic. “Take THAT” says the person dedicated to enjoying the day without the tyranny of random, mysterious and irksome thoughts.

(One can even make a slapping sound, to accompany the thought.)

Maybe we don’t need to delete an entire species, even the lowly mosquito. Given mankind’s ability to grossly misjudge the value of living things, it’s probably safer to keep his finger off the “delete” button, as well as those other “buttons.”

But we can at least identify, isolate and administer swift justice to those things that circle us and plague our days and nights, whether animal, vegetable or intellectual.