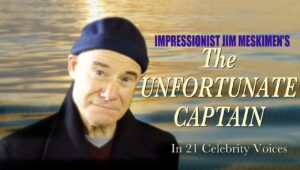 aboard the tall ship Liberty

untroubled were by distant clouds

The captain didn’t help at all.

Quoth he, “Yon storm is no mere squall,

and ordered all hands below decks.

The able-bodied and the trim,

all those who didn’t care to swim,

all passengers and all their gear

were crammed and hunkered down in fear.

“We shan’t survive this tempest’s whip

with people clambering o’er the ship!”

And yet, the mild storm took its time,

scant raindrops fell upon the brine.

Though gentle winds but murmured low,

his lordship still cried “Get below!”

A kind of martial law decree

he made, in this emergency

and penalties dire did he forewarn

for all who would deny the storm.

A gruesome fine he soon announced,

whilst on the peaceful tide they bounced,

that any who did not obey

would lose their rations for the day.

And furthermore, the captain said

those who disputed his remarks

would find themselves as food for sharks!

bore witness to this fierce tirade,

but all souls huddled in the hold

agreed to do as they were told.

Belowdecks was no place for crowds,

and air grown stale with every sigh

The captain, firm in his resolve

stood by the orders he had called;

he lounged inside his stateroom fine

and chewed on steak and drank fine wine,

his own directives: that to be

outside at all, even by chance,

would risk the gravest punishments,

he often strode out in the air,

at night or day, and didn’t care

who witnessed his carefree removal,

nor cared he for their disapproval.

A week went by, and then the next,

the moaning from below the decks

would crack the heart of any man,

save one, the Liberty’s captain.

The mate, who from his berthing strayed

peeked out to view the tranquil day

and wondered, rubbing at his eyes

if his chief’s bullying was wise.

Without a crew to tend the sails

the ship was late, and could not fail

to inconvenience all aboard

who had appointments on the shore.

The health of nearly everyone

who gloomed, sequestered from the sun,

diminished to a sad malaise,

though clement were the passing days

At last, a mutiny was reared;

they grabbed the captain by the beard

and tied him roughly to the mizzen,

yet he stood by his prior decision.

When Liberty sailed into port

some short time later, and the court

did find him guilty of, for one,

creating peril where there was none,

And also for duplicity

in disobeying the decree

that he condemned all others to,

his liberty was not renewed.

At the gallows, grim and terse

“Better sick or weak or poor

than lying on the ocean floor.”

yet wondering still why DID that captain

predict such doom where none had happened?