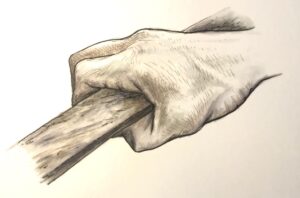 The iron cart in which I rode,
Dodging pebbles from the crowd,
A steady rain glistened the rail
as stones and insults fell like hail.

To what grim stop was I en route,
soaked, desolate and destitute?
The noisy metal wheels rolled on
Through that wet, agonizing dawn.

The trek grew long, I heard a shout
And many in the crowd died out,
Some were newborns, then grew they old;
The rain continued, biting cold.

My beard lengthened, my legs grew weak,
The rusty cart became antique
The very landscape ebbed and flowed
As I was carried down that road.

The destination still too far-
I could not spy it from the cart.
Perhaps it lay beyond that hill–
But, no, it must be further still.

At last, with hair grown o’er my eyes
The angry mob long gone behind
My vision then I could not trust–
The tumbrel crumbled into dust!

And as I stood, far from my fate
Yet fearful that the hour was late,
The clouds at once held back their tears
And I abandoned former fears.

My destiny, that harsh reward,
My neck beneath descending sword
Was not inevitable, nay–
I’d live to see another day.

Inexorable as it had seemed
It all had vanished like a dream.
I realized, as all men must
That even iron carts may rust.