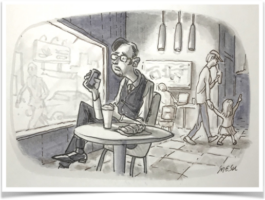 The hipster, latte cup in hand, surveys the restaurant,
and cares not if his habits paint him as a dilettante.

A billion years of evolution have lead to what we see-
the hybrid combination: Man slash His Technology.

It’s his to waste or to command without a hint of strain;
entitled, he perceives himself, to thrive divorced from pain.

Ear buds plunged deep inside his skull, he hums a wordless tune;
more memory in his device than was used to reach the moon!

With access to all human thought no further than his fist…
he doesn’t know enough to seek the reason he exists.