The first time I visited the set of Happy Days…

The first time I visited the set of Happy Days I was about 14 years old.

The pilot had been produced a couple of years before.

The show, which would go on to run for eleven seasons, had an unusually long gestation; the pilot literally sat on the shelf after being passed on, only to be picked up again when actor Ron Howard’s stock soared with American Graffiti in 1973.

Ironically, it was the pilot of Happy Days that helped Ron Howard land the lead role in American Graffiti; George Lucas saw Howard on tape as Richie Cunningham and it helped him imagine him in the role.

I’m sure Ron learned plenty from working with the fledgling George Lucas; by that time he had decided what his future career path would be.

So young Ronny Howard helped move his film career forward, from a point in the past, to help with the birth of a new hit TV show in the future.

I’m sure there’s basketball term that describes this sort of maneuver.

In any case, I wasn’t invited by my mom, actress Marion Ross, to visit the Happy Days set until the show was well into its first season. I recall going with her to Paramount studios, accompanied by my childhood friend, Danny Sternfield.

The environment of the Happy Days set was very different than what it would become in just a few years. Originally the show was shot “single camera”, meaning like a film and without a studio audience. That would change in the third season when Happy Days become a multi-camera show, (like The Big Bang Theory or How I Met Your Mother) and evolved its true identity.

I well recall thinking, when I heard Happy Days was going “three camera” that it was a really, really bad idea.

Anyway, the set of the Cunningham livingroom that day was vast and dark, and very, very quiet. As any visitor to a Hollywood movie set will understand, it seems like you need to tip-toe around, speaking in a whisper or not at all, and that if you drop something… heaven help you.

It’s rather boring to watch a show being shot this way. You can’t really even hear the actors, there are always people and equipment in the way, and they do it OVER and OVER again…

(Danny and I were also probably trying desperately to crack each other up, which would have added to the general tension.)

That day I met the Happy Days cast for the first time, Tom Bosely, Erin Moran, who was really a little kid then, maybe 12 years old, Donny Most, Anson Williams, and also a tall redheaded actor named Gavin O’Herlihy, who was very kind to me.

Gavin was cast as Richie’s older brother Chuck, whose presence in the Cunningham family was doomed. He would quietly disappear, only to be referred to in later years obliquely, as a kind of inside joke.

I think there was also an offscreen dog owned by the Cunninghams, who suffered a similar fate. Nullified.

Back then, Ron Howard, Donny and Anson were all strapping teenagers of 18 or 19. They were kind to me and very alive. I remember Anson asking me about if I wanted to go to college. I was trying very hard to be cool and impress them by being snarky, which was how I thought real grownups talked.

In a corner of the stage, I met the actor who would become the reason for it’s meteoric rise in those pre-cable, pre-digital times, the 22 year old Henry Winkler. He was off by himself, having a cigarette. Right inside the soundstage. (You could do that then.)

It was my first experience, one of many with Henry, where he displayed his abundant talents at public relations and good manners. I did not possess those abilities. He was already a Black belt.

I remember saying to him, referring to his cigarette, “That’s not very admirable.”

“No, you’re right”, said the Fonz, “it’s not very admirable. Thank you for pointing that out. I’m going to try quit one day.”

I don’t recall meeting the ebullient show director, Jerry Paris, who would helm nearly every episode, about whom very amusing books could be no doubt be written, but he was probably also there somewhere in the shadows.

While at Paramount that day, my friend Danny and I also visited the soundstage containing the Brady Bunch backyard and met Florence Henderson; (the series was still in production, but nearly over) and the realistic Little House on the Prairie interior set, housed inside a huge Paramount soundstage.

All in all it was a mild little adventure, probably just a nice day away from Portola Junior High school for me, hardly a harbinger of the phenomenal success that show would mean for my family, and the life-changing relationships that would result from it all.

Ron Howard is now in his sixties, and one of the very top film directors and creative executives in the world. Anson directs and produces and Don Most acts, directs and sings standards with his big band.

My mom, now 90, is enjoying her garden and interacts with fans from around the world who all say she “raised” them.

Speaking of which, my old friend Danny Sternfield became a busy obstetrician, and has brought tens of thousands of babies into the world.

These days, whenever I visit Paramount Studios, either for work or for an audition, I find random personal memories scattered there from that time. I was a part of it, yet not really a part of it, but even from the outskirts, it had magic and the feeling that something wonderful was happening inside the gates of that lot. 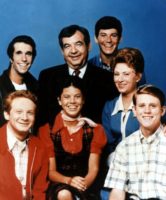