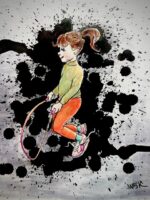 I hear the sound again, a rythmic slap, and know she is outside.

A peek outside my front window thru the shutters verifies it– Iris.

Iris, the… kindergartner? How old is Iris, anyway? Four? Five?

Old enough to be allowed out on her family’s driveway jumping rope at 7 a.m.

She’s been at it all summer, every morning; at least every morning I’ve been home and up early enough to notice, which is often.

Tiny, with thick, nut-brown hair tie back severely in a pony tail, wearing tights, pink usually, but sometimes white or violet. White tennis shoes with pink reflective sections that flash in the sun when she jumps.

Eyebrows, what there are of them, gathered in a tiny knot, lips pursed, tiny tongue occasionally visible in one corner of her mouth.

The look on her face always the same: FOCUSED.

In my mind I picture how to do it: strips of copper mounted to the driveway perpendicular to the path of the rope, some kind of brushes at points of impact, conductive cable replacing the nylon, then a feeder line to the roof or perhaps under the garage door to a storage battery…

Who knows? Might be enough to power a set of garden walkway lights or an a.m. radio.

I’ll have to look it up on YouTube. Gotta be a way.

But now, of course, all that energy is just getting released into the atmosphere or wherever energy goes; a dispersal.

Looking at Iris’ face, though, that energy doesn’t seem to be disappearing, it’s concentrating itself, building up inside that small, determined frame.

Eyes ahead, hands gripping the handles, the rope a pale blur, like a prop plane blade whizzing above the tarmac.

Incredible endurance for a kid. If she pauses, or stops to rest, I’ve never witnessed it. She has two speeds, Maximum and “Oh, she must have gone inside.”

What does she think about, I wonder.

Counting, maybe. Kids love to count. Just counting to one hundred– that’s a game to a five year old. But counting and keeping up that grueling, repetitive pace? That’s impressive.

She’s going places, that Iris, not just up and down.

How old IS she?

I come up with a backstory for Iris. (I clearly have too much time on my hands.)

First of all, Iris isn’t her real name. It’s Svetlana.

She’s a Russian circus midget spy, posing as a little American girl named Iris, who just happens to have the endurance of an adult decathalete.

That sparkly pink jump rope, those shoes, that innocent pony tail? All a disguise.

The only chink in her armor is that lazer focused expression of her cold little eyes.

Iris is a mole. It’s the only rational explanation.

I plan how I will get her to slip up and reveal her true identity.

While walking my dog past her house some morning, I’ll compliment her on her skills… in Russian.

(Probably is gonna take a trip to YouTube and a lot of rehearsal on my part; “Nice form”– so short in English, probably 16 syllables in Russian. Do they even have syllables? They must, I decide. Even if their “r’s” are backwards.)

She’ll be so intent she won’t even look at me or break stride. In an unusually deep voice for a five year old, she’ll murmur “Priviet.”

Then, a look of mounting horror as she realizes what she’s done. Her cover, blown.

Her jump-rope will fall to the concrete, steaming.

Fear now replacing determination in those eyes, she’ll study me, as I stand there with my dog, like a Stasi interrogator.

Her unknit eyebrows will arch upward in supplication, and tiny beads of sweat will form on her forehead and trembling upper lip.

“Don’t be concerned, comrade,” I will say, in flawless Russian, (man, this is really going to take some work, maybe I should hire a tutor) “your secret is safe with me.”

There’s probably a Russian saying that fits perfectly–they have a ton of great sayings– “you can put your eggs in my basket”, or “the ice is thick on my side of the pond.”

But IS the ice thick? IS her secret safe with me?

We both know the answer to that: she can’t.

She will have to move on, assume a new identity, change her name, to Suzie maybe.

Maybe she’ll use those super-strong legs of hers to climb up my garden trellis one dark night, pry open my bedroom window with a frozen strip of fruit leather and administer a killing blow as I sleep.

Or, finish me off with a poison dart, blown from a bendy straw.

OR, most boldly incriminating of all, leave me strangled and silent with her sparkly pink jump rope wound around my neck.

“Obviously a suicide,” the coroner will say. They always say that. Don’t they watch British murder shows? Who the hell would commit suicide with a child’s jump rope?

I close the blind and freshen up my coffee.