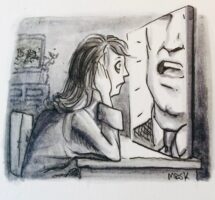 Marcy watched the nightly news
before she settled off to snooze,

but in the morning, close to dawn
poor Marcy switched the news back on.

At various times throughout her day
she’d check what anchors had to say.

And if she travelled from her home
she’d read the updates on her phone.

She didn’t notice, every day
Her eyes were dull, her skin grew gray;

she jumped with fear at common sounds,
her hands shook and her heart would pound!

She questioned motives of her friends
and vowed she’d spend less time with them.

Appalling visions filled her dreams;
she often woke to her own screams!

Just when things nearly all went south–
her bundled internet pooped out.

The bad news that had been her diet
retreated, leaving only… quiet.

Now, Marcy generally fills her day
with what real people have to say,

and sometimes, though it seems absurd
she speaks and finds out she’s been heard.

It took her some time to adjust
But Marcy’s like the rest of us,

at least, as long as she eschews
to overdose on broadcast news.