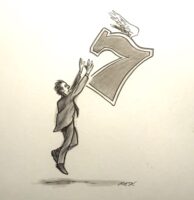 Sebastian liked to play the slots,
in fact, he played them lots and lots.

Infrequently he’d win, but then
would promptly start to lose again.

His youth was spent, the lion’s portion,
gambling away a tidy fortune

left him by his great-grandpa, Bennett,
who would have blanched to know he’d spent it.

In Cabazon and up in Reno,
at every Indian casino,

the slots were his preferred escape,
until he reached that certain age

at which his mental state declined;
his wits began to quite unwind,

until, and rather like the slots
he doted on, his thoughts

strictly by chance, and quite unplanned. It
was his mental one-armed bandit.

Just like the sevens he’d watched spin,
right answers quite eluded him.

Sebastian finally was bereft–
he hadn’t any quarters left.

Too late he grasped that he’d been caught,
and had this tardy afterthought:

Miss Luck must have an evil twin;
Don’t play at games you cannot win.