My Experience Directing The Best Audiobook EVER. 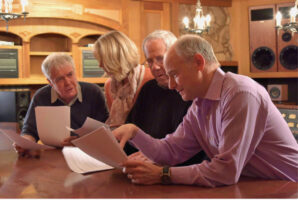 I first read the sprawling sci fi epic, Battlefield Earth by L. Ron Hubbard when it first came out in paperback circa 1985. I found it impossible to put down, literally missing stops on the subway in New York City, where I lived at the time, because I was so transported by the action.

It became a favorite novel that I would return to again and again over the years for the sheer pleasure of reading it.

I’m not alone in loving Battlefield Earth; other fans include top names in Sci Fi, including Robert Heinlein, who called it “A masterpiece.”

So, a couple decades later when I was approached to direct the audiobook version, I jumped at the chance.

Although it had been recorded before as an abridged audiobook, (with actor Roddy McDowell narrating and doing all the voices) we set out to create a totally immersive, high-quality, multi-cast unabridged audio experience. With the help of some truly amazing actors, musicians and audio technicians, I believe we succeeded.

Hardly a week goes by that someone doesn’t come up to me and tell me how much they enjoyed listening to it, which for a 47 1/2 hour long audiobook is pretty extraordinary!

The actors I had the honor to direct were top of the line, major names in animation, voiceover and audiobooks, award-winning stars in their own right. I learned so much from directing them, and also about the art of narrating, which I now use in narrating for other publishers.

Battlefield Earth, which has been compared to the Star Wars saga in it’s wealth of memorable characters and intriguing plot, is just as pertinent today as it was when it first came out in 1983. If you love Sci Fi in its purest form,, I strongly recommend you pick up a copy and listen to our Audie award-winning production in your car.

Warning: you may find yourself taking long, unscheduled drives, or staying in your parked car in your driveway, just to savor this gripping tale from a true master of the genre.

Here’s a link with more about our amazing production: